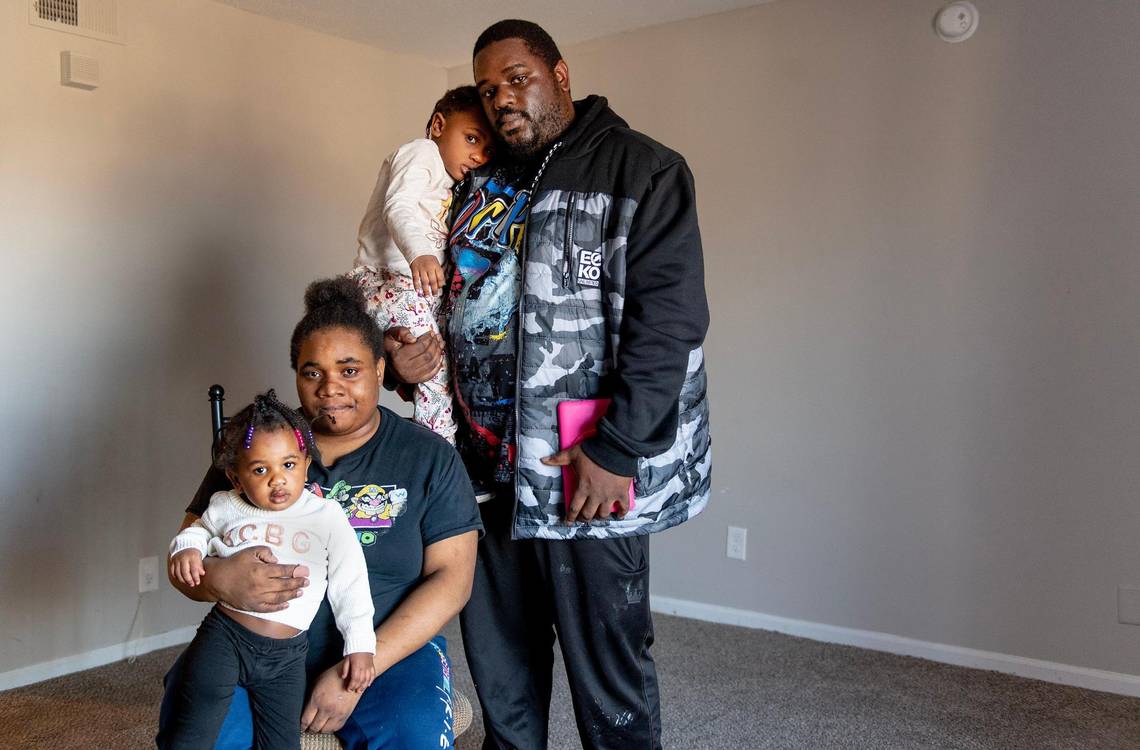 Those are just some of the problems Roosevelt Price and Michele Williams have encountered at Stonegate Meadows, a sprawling complex with apartments and town homes about two miles east of Arrowhead Stadium.

Their family of five has had to change apartments twice because of serious issues in the first two units. Even in the third unit, they have not had hot water since Christmas. And now, they are in limbo because their Section 8 voucher is being removed, leaving them unsure of where they will live come mid-February.

The couple said they want stability for their children, ages 1, 3 and 8.

“I’m tired of our kids having to go through this,” Williams said.

Since October 2019, city inspectors have identified more than 500 violations at Stonegate. Last year, a fire in one of the buildings injured more than a dozen people.

The property is owned by Elite Management Group, LLC, based in New Jersey. The company did not respond to an email from The Star and the complex’s local office did not return a call seeking comment.

Now a group of tenants along with the Heartland Center for Jobs & Freedom are organizing to get the problems addressed. Last week, they sent a letter about the “unsafe, unsanitary, and uninhabitable conditions.”

“We’re hoping that Stonegate will come to the table to develop an aggressive plan both for inspections and repairs,” said John Bonacorsi, an attorney with the Heartland Center.

U.S. Rep. Emanuel Cleaver also sent a letter to the company saying, “No Missourian deserves to live in unsafe or substandard housing, and it appears Stonegate Meadows has fallen far short of its obligations.”

Many of the dozens of units at Stonegate qualify as Section 8 housing, meaning tenants pay reduced rent with the government subsidizing a large amount of the costs.

Past and present Stonegate residents say the property owners are not reinvesting that money, leaving them in squalid conditions. Bonacorsi said this is also reducing the already limited affordable housing options in Kansas City which is “extremely concerning.”

‘Where else are we supposed to go?’

Price and Williams moved to Stonegate in 2016. At first, it was great.

But there has been a “slow decline,” Price said.

In their first town home, mold became a problem. Then the sewage backed up, leaving contaminated water in the living room for nearly two months.

They called the property’s office and put in work requests, and were finally moved into a second unit in 2019.

But they ran into more problems, including what started out as a small leak in the kitchen ceiling that turned into a large hole pouring a torrent of water from the second floor bathroom whenever the shower was used.

Then their middle daughter got RSV and was hospitalized for weeks. Williams said they were told mold may have caused the infection.

On a winter day last year, the heat reached only 52 degrees inside.

Three months ago, they were moved into the third unit.

“Life’s been like boxes, bins and totes,” Price said.

In the process of moving their belongings from the second apartment, Price discovered the ceiling had collapsed and water was pouring down, ruining some of their property. He had to call the fire department to get the water shut off.

Then last week, Williams said she was told their voucher for Stonegate was being pulled because of the conditions. They have until Feb. 16 to find a new home, something they wanted to avoid so their son would not have to change schools. But so far, none of the places they have contacted accept Section 8, have availability or offer three bedrooms.

Bonacorsi said some tenants living in unsafe conditions won’t report the problems because they fear losing their Section 8 housing.

Price said he and Williams both work, but things are more expensive right now which makes everything harder.

“Where else are we supposed to go?” Price asked.

He said he wants the company “to actually manage the property the way it’s supposed to be managed, you know investing.”

On April 8, 2022, a fire at one of the buildings injured 15 people. The Bureau of Alcohol, Tobacco, Firearms and Explosives determined the blaze was intentionally set.

“We have investigated and exhausted every lead and have yet to identify a suspect,” ATF spokesman John Ham said last week. “We have not been able to rule out that the fire was started by a homeless person(s) that should not have been in the building.”

Stonegate’s on-site office is boarded up from a different fire.

Aaliyah Ross lives a few streets over in the complex. Like Price and Williams, she is also looking for a place to move.

Bugs have been a huge problem in her unit, the second she has lived in at Stonegate.

“Roaches fall down on us,” she said.

In her two-bedroom apartment, pests are visible as is a gaping hole in the tiles of a shower and a patched up but unfinished area above a second shower.

Even more worrying was the day her 3-year-old daughter appeared to stop moving and turned pale. At the ER, Ross was told their environment and mold were causing the child’s health problems.

“Mentally, it’s overwhelming,” she said of the living conditions.

When Charlesetta Lockett moved into Stonegate in November 2019, she requested a ground floor unit because she uses a walker. She ended up in a second floor apartment where the bedroom ceiling collapsed in October 2021. Fortunately, she had fallen asleep on the couch in the living room that night.

Her friend Nathaniel Johnson also moved there in 2019. The Air Force veteran chose Stonegate because of its close proximity to a VA annex where his doctor’s office was located. Last April, he was served an eviction notice saying he owed about $3,000. He did not know how that was possible because he had always paid his rent on time and had Section 8 assistance.

Except his voucher had expired because the property had gone into abatement. No one had told him.

His case was dismissed with the help of the Heartland Center. Bonacorsi said there was a clear lack of communication by Stonegate when it came to Johnson’s voucher status and that it was outrageous that the company continues to file evictions when they are not holding up their responsibilities as property owners.

Johnson and Lockett have since moved into an apartment together in Independence.

Lockett said Stonegate’s owners need to get the property cleaned up.

Johnson said they need to “clean it up or shut it down, one of the two.”

In response to complaints about Stonegate, the city’s Healthy Homes program conducted 121 inspections from October 2019 to June 2022.

Stonegate’s permit was twice suspended in 2021.

Pekarsky said Healthy Homes officials have “been in continuous contact” with Stonegate since the cold snap in December caused pipes to burst, leading to flooding and other water problems. Several cases remain open.

“The Program is closely monitoring the abatement work at Stonegate Meadows and will continue to conduct re-inspections with associated fees issued until all open cases are resolved,” Pekarsky said.

The Heartland Center is representing a dozen current and former residents in an effort to get Stonegate to take action.

“Tenants have a right to live in safe and sanitary housing. It is what both the law and basic human dignity requires. Stonegate has made millions of dollars and it needs to finally start investing that money into the property, as required by law,” Bonacorsi said. “Tenants are demanding immediate changes from Stonegate. If that does not happen with great urgency, we will seek court intervention. This has gone on far too long.”

Tenants who need to make a complaint can contact the city’s Healthy Homes program at 816-513-6464.