The most startling debate line 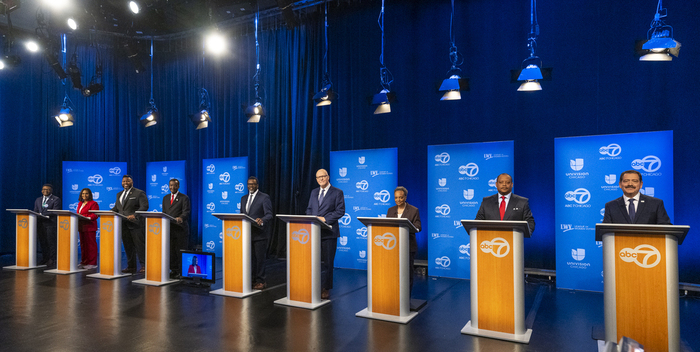 When a suspect flees, police officers “should be able to chase them down and hunt them down like a rabbit,” Wilson said during his closing remarks.

Lightfoot fumed: “For a candidate for mayor to say we have to take the handcuffs off the police and let them hunt down human beings like rabbits, is an extraordinary thing,” she told reporters after a debate that saw her take heat from all sides on public safety. The mayor invoked Chicago’s dark history of misconduct at the hands of police commander John Burge, who tortured people in custody. “I fully and utterly condemn it,” she said.

Wilson doubled down. In a statement to Playbook, he said the issue is “personal.” Wilson lost a son to gun violence years ago. “If someone murders another person, police should hunt the perpetrators down at all cost,” he said in a text statement sent by a spokesman.

Wilson’s take on public safety gives Lightfoot’s campaign an opening to attack the businessman who has a solid Black voter base, which the mayor needs going into the Feb. 28 election.

The debate itself was fairly behaved, with candidates showing differences in how they’d manage. The debate will re-air on ABC 7’s main channel Sunday at 10:30 p.m.

Other big debate moments: Brandon Johnson, the Cook County commissioner who has the support of the powerful Chicago Teachers Union, took a hard swipe at Congressman Jesus “Chuy” Garcia, who’s seen as a frontrunner in the nine-person race.

Both men are angling for progressive voters. In a report by Sun-Times’ Fran Spielman, Johnson accused Garcia of ‘abandoning the progressive movement,’

Paul Vallas and Lightfoot poked at each other over migrants being sent to Chicago. Vallas said Lightfoot is grandstanding on the issue, while the mayor said it’s only right that she call out “racist, xenophobic practices of governors like Greg Abbott (of Texas), who are treating migrants like freight.”

— Different visions, different tactics: “They agreed that crime has become a huge problem, but disagreed over how huge and what the solution is. They all deplored high taxes and, in general, promised that they would not raise them further,” by Crain’s Greg Hinz.

— Lightfoot often took the brunt of attacks as she sought to defend her record, report the Tribune’s Alice Yin, A.D. Quig and Gregory Pratt

— In a lightning round question. all nine candidates took a stand on what should happen to the Bears, via Sun-Times’ Mitchell Armentrout

ON THE TRAIL: Navy veteran and former Cook County State’s Attorney Bill Conway has more than $340,000 in the bank in his effort to lead the newly configured 34th Ward — a high-rise-heavy area that includes parts of the Loop and Greektown.

“I’ll take that as a compliment,” Conway told Olivia when asked about the hefty fundraising numbers. “People recognize how important the 34th Ward is to our city’s future.”

Among his top donors: philanthropist Liam Krehbiel, whose family started the Molex electronic-connector company, businesswoman and Democratic fundraiser Trisha Rooney, and Matthew Pritzker, a cousin to the governor.

Conway is a familiar name to voters, having run unsuccessfully in 2020 for Kim Foxx’s seat as Cook County state’s attorney.

His opponent, Jim Ascot, is a noted real estate executive who immigrated from Greece as a child. He has about $8,000 cash on hand after raising $20,000 in the last quarter.

Ascot acknowledged his financial battle in a separate interview with POLITICO. “But I think that the most important thing is being out there and talking to people” — specifically about issues such as policing, government services and homelessness in the ward, he said.

Street smarts: Whoever represents the ward will take part in downtown development including the revitalization of the Loop’s La Salle corridor, which Mayor Lori Lightfoot has prioritized.

Earlier this week, the City Council approved a $5 million fund for storefronts in the corridor.

“We need people to be able to shop and spend money, but at the same time be able to afford being downtown,” Ascot said.

Conway’s take: “Like every central business district around the world, you know that it can’t just be a place where people work,” he said. Residents also need a place to “live and eat” in the neighborhood.

If you are ABC 7’s Craig Wall, we’d like to know if the Chicago mayoral candidates made any special requests ahead of last night’s mayoral debate.Email [email protected].

On 55th Street at 10 a.m. for the ribbon cutting of PODER headquarters, an immigrant integration center.

Have a news tip, suggestion, birthday, anniversary, new job, or any other nugget for Playbook? I’d like to hear from you: [email protected]

— Congressional pushback: Members of Illinois congressional delegation sent a letter to DuPage County Sheriff James Mendrick urging him to “rescind” his statement from last week that he wouldn’t enforce the new state law that bans assault weapons in Illinois. Reps. Sean Casten (IL-06), Delia Ramirez (IL-03), Jesús “Chuy” García (IL-04), Raja Krishnamoorthi (IL-08) and Bill Foster (IL-11), whose districts all include parts of DuPage County, signed the letter along with Congressman Mike Quigley (IL-05), who represented the area for 10 years before redistricting. The letter is here.

Tense talk: Illinois Rifle Association Executive Director Richard Pearson apologized to WBEZ’s Sasha-Ann Simons after an interview on guns in which he told her to “shut up.” Simons immediately cut off the interview. A spokeswoman for WBEZ said Pearson emailed an apology. And he tweeted one, too, acknowledging he was “rude,” and adding “I’m sorry for my behavior.” Here’s the interview.

— City offers relief to Chicagoans saddled with debt tied to administrative violations: “Two new programs offer ways to get out from under a pile of tickets for things like playing your radio too loud, littering or having an overflowing dumpster,” by Sun-Times’ Fran Spielman.

— Des Plaines Theatre operator Ron Onesti cancels Awake Illinois event after outcry: On Wednesday, Onesti had defended leasing the venue to the far right political group. That changed Thursday. “People mailing bullets to me, asking their neighbors to fill my garbage cans with dog feces, countless hateful calls and outwardly targeting the Des Plaines Theatre, wishing its demise. And how would that have been good for the community?” via Daily Herald.

— What Pritzker said: Gov. JB Pritzker said a POLITICO report out of Davos, Switzerland, that he was overheard talking about his political future missed the point. He was actually answering a reporter’s question. “I have every intention to serve out four years that I just won as governor,” he said Thursday in a media phone call about what he had been talking about at Davos. “To the extent anybody overheard something, it was literally the answer that I was giving to that question that you all have asked me before.”

— Judy Woodruff, who just signed off from “PBS NewsHour,” will be honored with the Distinguished Journalist Award from DePaul University’s Center for Journalism Integrity & Excellence on April 27. Sally Ramirez, a 1989 alumna and most recently executive producer of the CNBC show “The News with Shepard Smith,” will receive the Distinguished Alumni Award.

We asked what your first bill would be if you were a state legislator:

Gene Reineke of Hawthorne Strategy Group: “My first legislative bill would forbid public utilities, as monopolies, from spending money on advertising, marketing, and other promotional activities — especially while they are asking the ICC to approve rate increases that increase their profits.”

Donovan Pepper, with tongue in cheek: “A bill to make it a federal crime for people who don’t signal lane changes when driving!”

William Kresse, a Chicago Elections Board commissioner, would write a bill to change the election code so early voting sites in Chicago would always be open on Election Day. Those sites will be open in the upcoming municipal election, but it’s not a permanent thing.

Edwin Reyes would push for term limits and tougher limits on lobbyists.

John Lopez: “To best implement Amendment 1, I would amend the Illinois Employee Classification Act and add language to include all workers not covered by the current law.”

When was the last time you volunteered, and where? Email [email protected]

— One woman’s audacious quest to dignify politics, by Amanda Ripley for POLITICO Magazine

— Neighbor news: Wisconsin Assembly put a bail amendment on the ballot: “The Republican-controlled Wisconsin Assembly gave a final, bipartisan push Thursday to a proposed constitutional amendment that would make it harder for violent criminals to get out of jail on bail,” writes The Associated Press’ Harm Venhuizen

— Sean Sullivan has been named senior partner at Berwyn-based Del Galdo Law Group. A former U.S. Marine lieutenant colonel, Sullivan was the Corps’ senior trial prosecutor in the war crimes trials arising from Iraq and Afghanistan wars and a senior judge advocate under the command of Gen. James Mattis, a former defense secretary.

— Awisi Bustos has been appointed CEO of Boys & Girls Club Illinois Alliance. Bustos was senior policy adviser to Secretary Grace Hou of the Illinois Department of Human Services and before that worked as the Northwest Illinois coordinator for Sen. Dick Durbin.

Joseph Kromelis, who died last month, is memorialized in an obituary out this week. Kromelis. Known as Chicago’s “Walking Man,” Kromelis died of burn injuries suffered while sleeping on Lower Wabash Avenue.

TODAY’s QUESTION: Who was the Chicago police detective who appeared in dozens of movies and TV shows? Email [email protected]