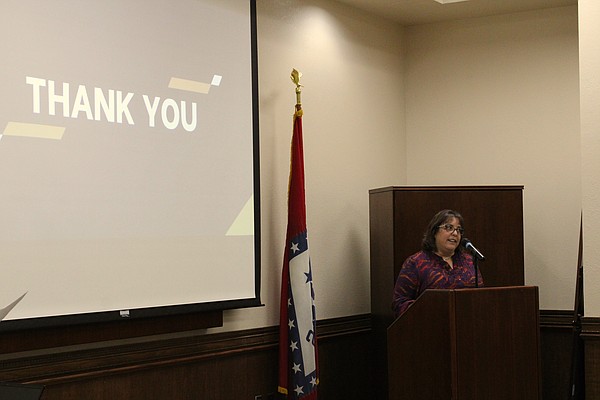 The United Way of Union County celebrated its 2022 fundraising campaign on Tuesday at the nonprofit’s annual meeting, where Executive Director Alexis Alexander announced that $1,289,148 was raised through the drive.

The funds raised surpassed the 2021 campaign’s donations by 7%, Alexander told the nonprofit, business and education leaders in attendance at the meeting.

A 2022 report provided by Alexander at the meeting outlines some of the ways funding helped each of the nonprofits achieve their goals last year.

“We appreciate everybody’s support in helping us reach another million-dollar milestone… I think this says a lot about the volunteers that we have, the work our agencies do, the commitment of our community, in a time of a strange economy, inflation, the price of eggs – whatever you want to say, I think that this screams that we have a community that cares,” Alexander said.

Alexander also announced on Tuesday that the United Way will present its annual Power of the Purse fundraiser in a traditional format this year for the first time since the COVID-19 pandemic started. The annual event helps fund the Dolly Parton Imagination Library in Union County.

“That is not funded by campaign funds, so we will do our annual Power of the Purse celebration again in April of this year, so I’ll just make a quick little plug for that: if you have any purses to donate, please drop them by the office,” she said. “That’ll be a fun event… I’m really glad to be able to do it in person again.”

The Dolly Parton Imagination Library is a national program founded by the country superstar in 1995. It provides a free book each month to children up to five years old.

The United Way of Union County sponsors the Dolly Parton Imagination Library for children in south Arkansas. In 2022, the 11th year the program was available in Union County, more than 15,000 books were mailed to 1,742 children in the community.

“My favorite part of last year was (when) Union County was recognized as one of the first communities in the state to start the Dolly Parton Imagination Library. So in May, Dolly visited the Arkansas Governor’s Mansion to celebrate, finally, all 75 counties in the state of Arkansas are now in the program,” Alexander said.

The nonprofit found some creative new ways to raise money in 2022, including through a new kickball tournament, which Alexander said she hopes to hold again this year.

“I think everybody has now forgotten about how much it hurt, injuries, and insurance has been paid, so we’re hoping to do that again, because it was a fun way to get together,” she said.

Looking ahead, in addition to the Power of the Purse revival, Alexander said she hopes to continue growing the Dolly Parton Imagination Library this year and expand support for children in Union County.

Other 2023 officers include Vice President Blaklee Ramsey, of Southern Realty Group; and Treasurer Rhonda Murry, of SouthernBancorp. Ramsey filled in for Shoup, who was absent, to present outgoing president Hazen with a plaque noting his service the nonprofit.

“On behalf of the Board, thank you for everything you did this year. I can say that I don’t think anybody would argue that you are a great leader. He’s very stoic and always a wonderful leader, so we appreciate everything you did for us,” Ramsey told Hazen.

Other new Board members include Catherine Nobles Medlock, of MacFarlane Company; Eric Smith, of Chemours; and Jeff White, of Cadence Bank.

For more information about the United Way of Union County, visit unitedwayunioncounty.com. 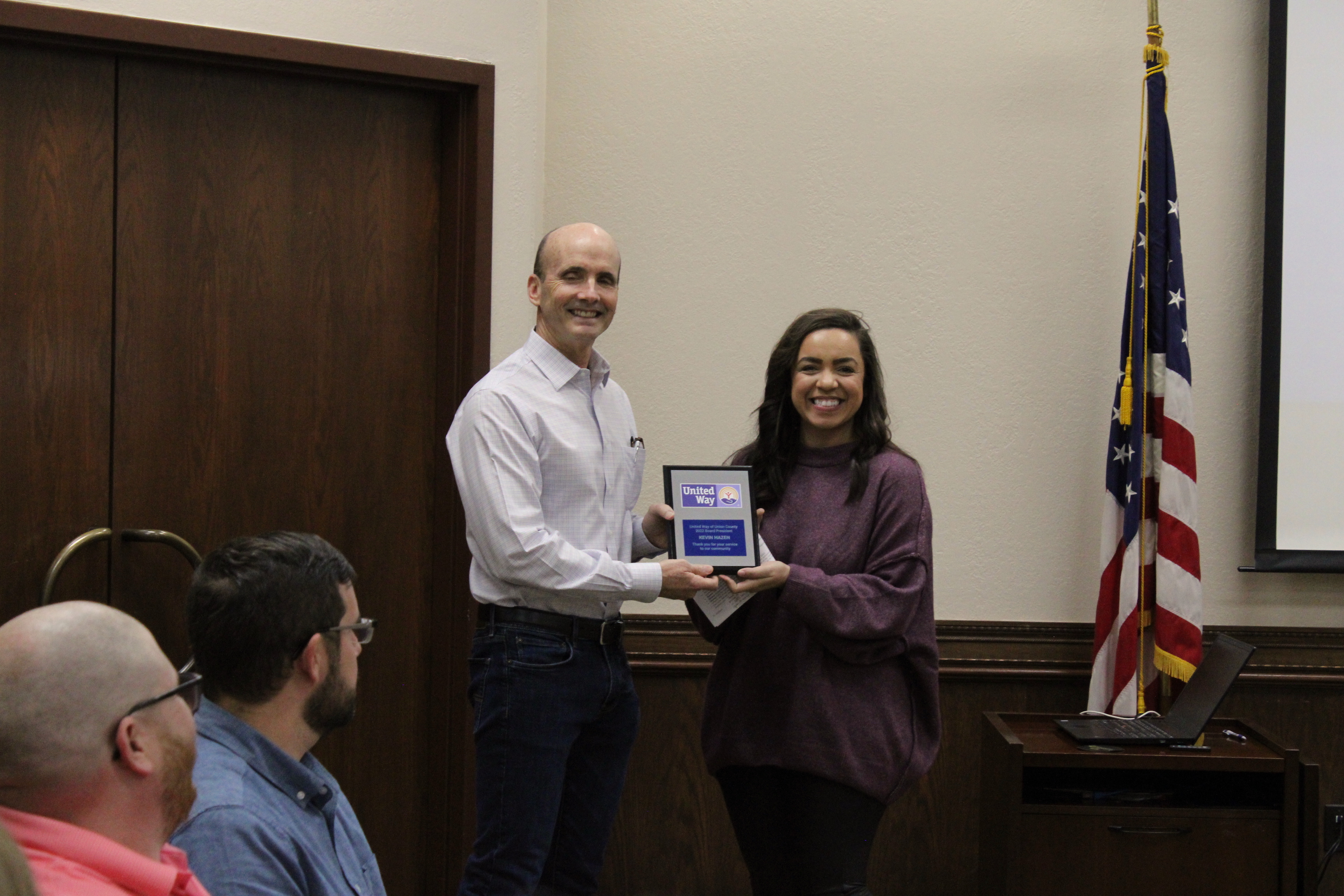 Outgoing United Way Board President Kevin Hazen, left, accepts a plaque thanking him for his service from incoming Board Vice President Blakely Ramsey during the United Way of Union County’s annual meeting on Tuesday. (Caitlan Butler/News-Times) 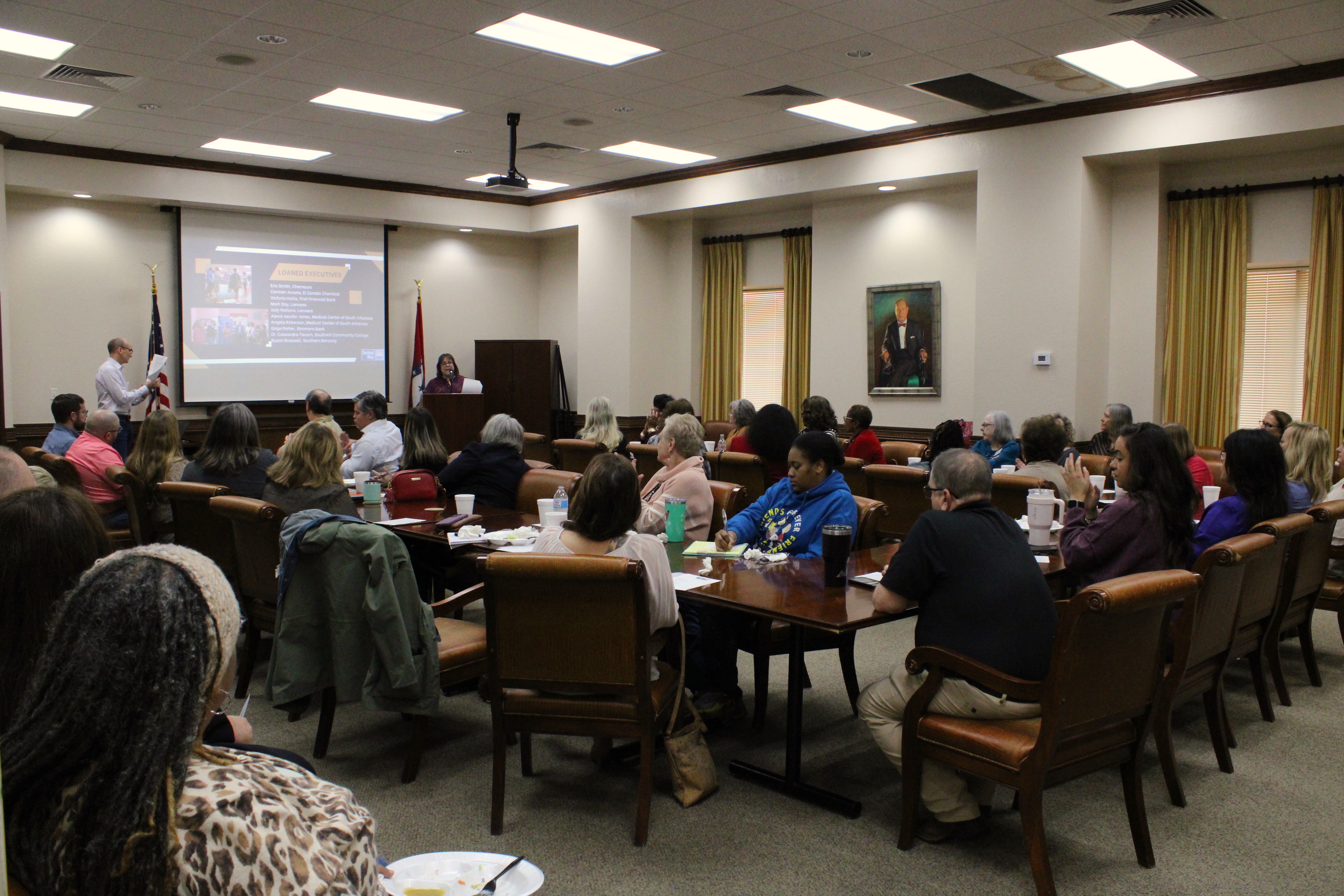 Area nonprofit, business and education leaders gathered at the El Dorado-Union County Chamber of Commerce on Tuesday for the United Way of Union County’s annual meeting, where executive director Alexis Alexander announced that the nonprofit raised more than $1.2 million through its annual campaign in 2022. (Caitlan Butler/News-Times)