What to know about the potential sale of 2 R.I. hospitals to out-of-state buyers 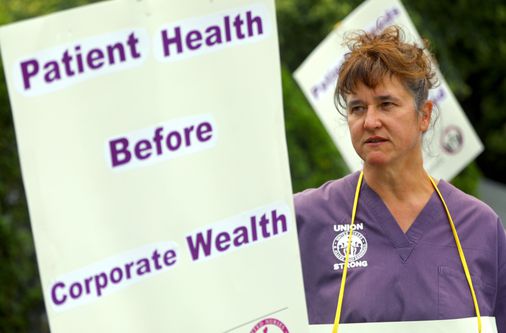 The two hospitals serve some of the state’s most underrepresented populations, and have had a long history of financial instability and grueling fights with local lawmakers over ownership changes. In 2018, the hospitals’ owner, Prospect, borrowed about $1 billion, which was used to pay a nearly half a billion dollar dividend.

QHR Health, a hospital management firm managed by another private equity firm, will assist in the transition and provide consulting support to the hospitals’ board of directors.

A weekday briefing from veteran Rhode Island reporters, focused on the things that matter most in the Ocean State.

Here’s what you need to know about the proposed deal.

Prospect and Centurion have signed this definitive agreement. Now what?

Just like with any ownerships changes in the health care industry in Rhode Island, Prospect and Centurion will have to submit an application through the state’s Hospital Conversions Act, where it will be scrutinized and either approved, rejected, or approved with conditions by Attorney General Peter F. Neronha’s office and the state Health Department. CharterCARE says it’s likely they’ll submit this application by the end of the year.

Earlier this week, Neronha said his office has “minimal information” regarding the deal and that his past experiences with Prospect tell him the review process could take “many months.”

What do employees think of this deal?

United Nurses and Allied Professionals represents about 850 employees at the two hospitals. In a statement, the union said it would be “intimately involved in this transaction.”

“We will closely vet this transaction to make sure any new owner or operator of these healthcare facilities will provide quality care for patients and proper working conditions for the healthcare workers who serve them,” read the statement. “Prospect Medical Holdings came in and tried to suck every last nickel out of our hospitals in the interest of making a bigger profit for shareholders. Our health care workers, patients and community members deserve better than that, and as a union we will do everything in our power to make sure that doesn’t happen.”

Will there be any reductions to care or employees?

It’s too early to tell. The application has not yet been submitted and made public.

What is Centurion and who started it?

The Centurion Foundation Inc. is an Atlanta-based nonprofit organization founded in 1996 that claims to help other nonprofits by “developing, arranging financing, and leasing facilities.” Centurion’s director and CEO Gregory K. Grove founded the company to establish, acquire, own and maintain health care facilities.

Grove also served as the president of The Guardian Foundation Inc., which has been dubbed Centurion’s “sister foundation” previously, which is designed to provide services to the elderly and those with disabilities.

Who else is leading Centurion?

Benjamin M. Mingle is Centurion’s president. He’s a certified public accountant who then went into real estate and development. He joined Centurion in 2018.

Most of Centurion’s directors don’t have a background in medicine. Why do they want to purchase two of Rhode Island’s hospitals?

Since Centurion would own CharterCARE hospitals if the deal closes, does the foundation have any goals for improving patient care or research?

That’s unclear. In a news release, Centurion said its charitable mission is to “increase access to and lower the cost of community-based healthcare.” However, it did not explain how the foundation could do that other than “reinvesting operational profits into its facilities, people, and communities it serves.”

Will Prospect Medical Holdings still be involved in CharterCARE Hospitals?

When asked for clarification, Brown wrote in an email that Prospect would “continue to work collaboratively through the [independent physician association] as we always have and don’t envision any strategic changes with the relationship.”

Who might serve on the hospitals’ board if this deal is approved?

Mingle said Centurion would maintain local leadership and would have a board of directors that includes local community leaders in the health care industry.

“CharterCARE is excited at the potential of this proposed acquisition, which allows us to build on Prospect’s significant investment in Rhode Island healthcare,” said Jeffrey Liebman, CharterCARE CEO. “The combination of a strong capital partner with an experienced operator of hospitals and the return to nonprofit status is very attractive.”

Brown said no one from Prospect Medical Holdings would serve on that board.

What is QHR Health?

QHR Health is a Tennessee-based company that provides management and support services to hospitals in more than 40 states. QHR was spun off from its former parent company, Quorum Health Corp. last year, and is now controlled by health care-focused private equity firm Grant Avenue Capital.

Has QHR been involved in CharterCARE Hospitals before?

Will QHR be listed as a signing party on the acquisition application to state regulators?

It doesn’t appear so. However, CharterCARE spokesman Otis Brown told the Globe that QHR will “continue to provide shared services support to the CharterCARE leadership team” if and when a transaction is closed.

Where can I read more about Prospect Medical Holdings or CharterCARE in Rhode Island?